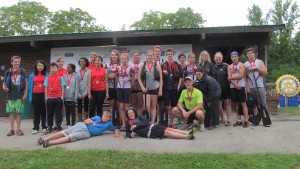 Three teams from Lambton Shores Dragon Boat Club participated in the 2015 Woodstock Rotary Dragon Boat Festival at Pittock Conservation Area on Saturday, August 8th.two U18 Super Strokers teams and the Long and Hards an adult team represented North Lambton. The teams paddled 500m in the qualifying heats. These qualifying times are used to select the division each team will compete for the remainder of the festival.

The Super Strokers Team 1 finished second in the Silver division championship. Their qualification time was 2:17.59. This team finished first in the semi-final paddling the distance in 2:17.59. In the championship final the team finished a close second with a time of 2:18.42.The U18 Super Strokers also received a gold medal for being the fastest student team at the tournament.

qualifying time of 2:40.09. This adult mixed team paddled a time of 2:36.99 to finish second in the semi-final. Four members of the Dirty Oars team joined this team for this competition. The Long and Hards finished third in the championship with 2:37.99 and the second place team finishing with a time of 2:37.27 the difference was 72/100 of a second between second and third place. 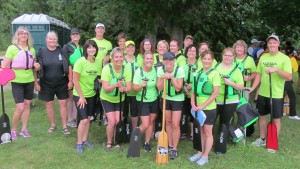