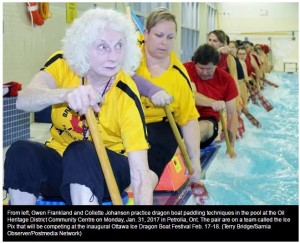 PETROLIA  – There was a strange sight for users of Petrolia’s pool Tuesday night.

About 30 people were lined up along the sides of the swimming area at the Oil Heritage District Community Centre armed with paddles, practicing different movements as coach Cathy Johnson barked out instructions.

These paddlers – don’t dare call them rowers – are gearing up for a rather unique event, the inaugural Ottawa Ice Dragon Boat Festival. It’s the first time ice dragon boat racing will be held in North America, Johnson said.

“It’s only been held in Europe and Asia,” she said. “This is just unheard of in North America.”

Which means none of the 58 teams attending from across the continent will have a competitive advantage.

“It’s a blank slate, we’re all even,” said Johnson, a Petrolia resident.

The Feb. 17-18 event will coincide with Winterlude and Canada’s sesquicentennial.

Three area clubs were practicing together Tuesday in anticipation of the frigid water including the Lambton Shores Dragon Boat Club, the Breast Buddies, a group of breast cancer survivors from Lambton and Kent counties founded in 2001, and the Raging Dragons – established in 1996 – from Chatham. A collection of paddlers from the two counties have combined to create a team for the festival called the Ice Pix.

After arriving in Ottawa Feb. 16, they’ll practice Friday and race Saturday. The festival, held on the Dows Lake section of the Rideau Canal, originally slotted 48 teams.

“And that sold out in 10 minutes,” said Collette Johanson, captain of the Ice Pix. “So they opened up another slot of 10.”

There will be four or five lanes per race, Johanson said, with boats seeded into divisions based on time. Each dragon boat – essentially a large canoe featuring one steersperson, a drummer and eight to 10 paddlers – is guaranteed three races.

The boats will be provided at the event.

Dragon boats have a Chinese background – they’ve been around for about 2,000 years, Johnson said. The concept came to Canada initially as a breast cancer survivor and support activity, but has since spread to all sorts of participants regardless of their medical history.