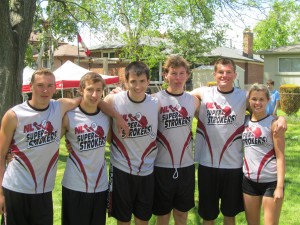 The selection process is finally over for the U18 Canadian national team. Six paddlers from the North Lambton Super Strokers will represent our Canadian team at the 12th IDBF World Dragon Boat Racing Championships 2015. The World Championships will be held at the Welland International Flatwater Centre in Welland, Ontario from August 19th to 23rd.

The Lambton Shores paddlers attended a training camp from August 15 to 17th, 2014, and met the head coach, Michel Wu. At this camp, each athlete’s fitness level was tested and the coach took videos of each paddler in action in the dragon boats. The videos were placed on line with their fitness scores for each individual to access. A vigorous fitness program was provided for the athletes to follow.  Each paddler had monthly opportunities to attend fitness sessions in Toronto to practice paddling in an indoor setting at Afterburn Fitness.

The National team coaching staff held training camps at March break and made their final cuts after the May 8th to10th training camp at the Sunnyside Paddling Club in Toronto. Athletes from Vancouver, Montreal, Toronto, Stratford, Woodstock and Lambton Shores will represent Canada at the World Dragon Boat Championships.

Congratulations to the following Super Strokers on making the Canadian National U18 team; Kyle Cornelissen, Paige General, Ryan Bakker, Ben Williams, Mike Backx, and Billy Armstrong. The Canadian team will get together for a week of practice before the world championships in Welland. The team stays in communication with their coaches and each other through Facebook.

Each paddler will require approximately $ 2500.00 for this championship. This amount includes uniforms, lodging, race fees and transportation to and from the race site. Donations will be accepted for these six athletes. Please forward any donations to the Super Strokers treasurer Teresa Bakker. (519-828-3356)