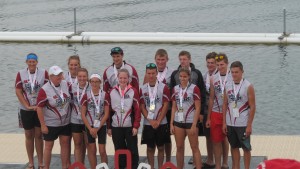 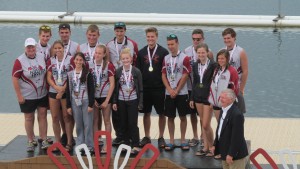 The Lambton Shores Super Strokers U-18 teams swept the competition at the Pan American Club Crew Dragon Boat Championships this past weekend with gold medals in all their divisions.

Welland, Ontario was the host city for this exciting international event, organized by the Pan American Dragon Boat Federation, which took place at the Welland International Flatwater Centre between Friday, August 14th and Sunday, August 16th.

This beautiful facility makes use of the old Welland Canal. This 30-foot-deep canal provides the perfect width and depth – and the favourable flatwater conditions – required for dragon boating.

The Welland games attracted teams from Puerto Rico, the United States, Canada, and Trinidad & Tobago. This was the second Pan American dragon boat competition, the first being held in Mexico in 2013.

On Friday, the Mixed 500 and the Mixed 2000 metre races were held. The paddlers were confronted with dark lines on the water, indicating squalls, which were trying their best to buffet the boats out of position. These squalls were evident from the beginning of the races right through to the finish line. All paddlers had to work hard to counteract the gusting winds.

One of the highlights of the weekend was Saturday’s U-18 Women’s 2000-metre race. In the second corner of the race, three boats were vying for right of way. The Super Strokers boat was bumped and veered off the line, bumping the third boat.

Heated words were exchanged between the two teams, and the Lambton Shores girls were close to having a swimming experience. They were later fined with 20 penalty points, but two points were awarded back to them because they had been bumped.

Another team was not so fortunate; their boat tipped on the corner and capsized, sending the entire team into the water. This team was comprised of paddlers who are either low-sight or visually-impaired.

Their training was evident in the professional manner in which they hung onto their boat while rescue boats were sent out. During this rescue operation, the race continued. In the midst of this melee, the Lambton Shores girls bore down and managed to win the race, even after losing several strokes and time points.

One interesting facet of this past weekend’s races was the use of small dragon boats. The standard 44-foot dragon boat holds 22 paddlers. The races in these events used a smaller dragon boat built for 10 paddlers, one steersperson and one drummer.

These smaller boats are less stable, and their use results in slower race times. Other than in their races in Italy last summer, this was the only time the Super Strokers have used the smaller boats.

Not only did our young people rise to these challenges, they conducted themselves with exemplary sportsmanship, athleticism and teamwork.

At the closing ceremonies, the audience erupted into applause as the site of the next Pan American Club Crew Games was announced. These games will take place in Puerto Rico on March 20th, 2017.