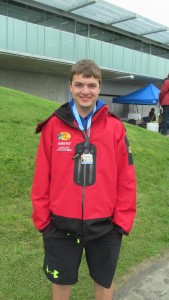 The long-time success of the Lambton Shores Dragon Boat Club is truly a team effort – and is made possible through the hard work of every member. Often overlooked, but always a key part of any winning crew, is the steerperson, who is responsible for the safety of the crew and the boat.

It is his or her job to check all safety equipment that is on the boat and to ensure that the boat is seaworthy. Steering is a skill achieved through practice, just as paddling is, and a good steersperson can win or lose a race for any team. Lambton Shores Dragon Boat Club have an excellent steersperson in Joey VanValkenburg of Forest.

Joey has been steering the U18 and U24 dragon boats for six years and is a natural. Without question, he has helped his team win races with his uncanny steering ability. Coach Cathy Johnson praised his efforts, remarking, “Joey is very good at what he does.”

These qualities were noticeable at the 2015 Canadian Championships in Welland in the 2000-metre race. This race is of a circulatory nature, having two straight sections and two turns in one circuit of the racecourse.

The 2000-metre at Welland involved three laps of the circuit. The steersperson must know the rules for proper starting procedures, overtaking and turning. VanValkenburg’s talents were very visible to the spectators. He drew praise for the excellent tactics he displayed in all aspects of the race, particularly in overtaking the opponent’s boat and selecting the best line to manoeuvre the 44-foot dragon boat through the turns. The tactics displayed in the turns allowed the Super Strokers U18 team to catch and pass many of their opponents.

Joey VanValkenburg comes from a long line of boaters. He has raced stock outboard hydroplanes with his father and grandfather for three summer seasons and operated several different types of powerboats. VanValkenburg started paddling with the Super Strokers in Grade 9 at North Lambton Secondary School and began steering the ‘tin tub’ dragon boat at the Port Franks Conservation Area.

VanValkenburg became certified for steering by completing the Dragon Boat Canada Steering Accreditation Course, a requirement for any racing sanctioned by Dragon Boat Canada. He has steered races at Disney World, Vancouver, Dubuque, Italy, Welland, Pickering and many local competitions.

The 20-year old spoke about steering a small boat (10 paddlers) for the first time in a practice session in Italy. “We were paddling through foot-and-a-half swells. We were able to get around the course twice and we almost capsized when we turned the boat around. Three of the teams dumped before they stopped the practice session. We were lucky, but this experience really helped our confidence in paddling the small boats.”

He spoke about the 2000-metre race at Welland on the last weekend of June 2015. The Super Strokers U18 team were in the lead and had passed all the student teams. Twelve dragon boats started this race at ten-second intervals. “Our team was closing on two adult teams and the referee boat had declared our boat had ‘Right of Way.’ We went through the turn passing both boats and straightened out for a few metres and the rope attached to the oarlock unfastened. I couldn’t steer the boat and we ended up not finishing the race. It was disappointing because we were well in the lead.”

Joey stated, “A steersperson must think about what’s going to happen before it happens. If you are approaching a turn, it is critical to have the proper line; otherwise your crew paddles extra distance. Any distance I can save will show at the finish line.”

One of the Lambton Shores Super Strokers best-kept secrets is steerperson Joey VanValkenburg, who is pictured here after steering the Super Strokers U18 dragon boat to their second Canadian championship in Welland recently. Photo by Doug Furtney