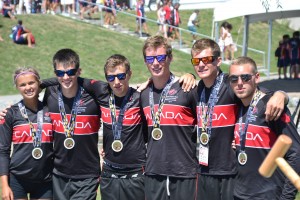 The 12th International Dragon Boat Federation World Nations Championships took place in Welland from August 19th to August 23rd. Lambton Shores was well represented at this event with 6 local U18 juniors and 1 U24 paddler participating.

After the first 3 days of competition, Canada’s youth were golden! Our junior boys – Ben Williams, Kyle Cornelissen, Mike Backx, Ryan Bakker and Billy Armstrong won gold in the open standard boat 2km and the 1000m open boat. They also turned in gold performances in the mixed 2k and 1000m, as well as the mixed 500m. As of this writing, they still have the open 500m and mixed and open 200m competitions to go. The juniors are competing in the U18 division against teams from Great Britain, the United States and Australia.

Paige General has been competing in the women’s standard boat as well as mixed, winning gold in the mixed 2k and 500m. She also won silver in women’s 2k. U18 women currently cannot compete in the 1000m race.

Hannah Bartlett from Stratford, but currently a Lambton Shores member, has won silver in the U18 womens 2k. Her sister Esther has won silver with the U16 women in the 2k and 500m and in U16 mixed 2k and mixed 500

The competition features teams from 17 nations around the world, in 7 different divisions (Jr. A and B, U24, Premier and Senior A, B and C), two boat styles (standard and short) and 3 classes (mixed, open and women). There are 257 races over 4 different race lengths at the World Dragon Boat Championships.